The City envelops its audience in an exciting theatrical experiment in how technology transforms old narratives into new ones. Created by a colorful collective of artists, The City unfolds as a simple scenario of boy meets girl, then he continues meeting her in different forums, medias, and mediums. Co-written and acted by its two leads, Jamie Roach and Catherine Hanna, Alive Worldwide’s The City is more than another sit-down-and-watch work of theater.

The City brings together the two lives of tough, young, New Yorkers who are looking for each other but don’t know it yet. They meet accidentally on the street then cross paths in each other’s dreams, phones, and OkCupid. They are in a state of isolated, low-level yearning that gnaws at them in their sleep, at work, in their need to be as frantic, busy, LinkedIn, and detached at the same time.

“The City envelops its audience in an exciting theatrical experiment…”

In the program, the creators state that connectivity was a seed for exploring relationships and technology. Before the show, there’s a woman giving free advice; musicians jamming away off to the side; a chess/checkers game, another woman offering free hugs (no one seemed interested—perhaps we are suspicious of smiling strangers offering free physical contact); a map with an invitation to note where we’d come from; a movement artist; and an oddly-dressed man who claimed to be an artist. This last personality engages the audience in a series of off-kilter modalities like talking and listening through long tubes to the person standing right next to him. Also next to the eccentric is a tray of ‘found items’ for anyone to take. I snatched up a pair of pistachio-shaped earmuffs without bothering to ask what I would do with earmuffs in the middle of the summer.

At intermission the players assemble the audience up into different groups and invite them to talk and to take selfies together for posting on the show’s website. The house roars to life with conversation. Complete strangers chat, laugh, and debate about city living. Intermission comes to an end much too quickly, as if we suddenly remember we’re supposed to be passive members of an audience. But after the show, the crowd sticks around. People chat onstage with the actors and band members.

If there is any structural suggestion to make to Hanna and Roach’s entertaining premise, it would be to use the audience’s energy after the intermission to bring them more into the play and to make them a part of the unfolding saga. This requires a certain trust with large groups of strangers, but that’s what this show seems to be championing in both art and life. Alive Worldwide has an excellent set-up that could really tap the potential that lies in each scary and unknown audience. We are like the strangers we see on the streets every day: a bit skeptical, leery, but we’re waiting for a moment to be called upon and to open up.

Hanna and Roach open us up to a small window of time and intimacy. The City finds the melancholic humor, tech satire, and slow-building beauty in this city of 8 million strangers to know each other.” -Aurin Squire, New York Theatre Review

Read a review of “The City” by Aurin Squire

WHAT:  The City is an immersive performance experience that examines how New Yorkers connect and disconnect in the city. The performance moves through realistic and symbolic theatrical scenes enhanced by film, dance, music, poetry, beat-box, photography and design. The audience will encounter connection as the literal and metaphysical ways humans touch and impact each other or fail in doing so. The performance plays with three primary “connection” themes: 1) social and relational dynamics    2) technology trends that hinder and enhance connectivity 3) the innate human longing for belonging. The performance will ebb and flow between dramatic, playful, thought-provoking and celebratory experiences. It will evoke a diverse audience to recognize parts of themselves while igniting a frisky, rare and fresh tryst with each other and the performers.

Special Thanks to Creative Support:
Catalin Zidaru, Nastya Blyakher and Amir Shpilman for supporting the development of the concept. Thanks to Catalin and Nastya for finding the beautiful TheaterLab space. Gratitude to other creative playmates along the way: Lauren Camp, EMP Orchestra, Blake McCarty, Jonathan Zautner and Margot Fitzsimmons.

Immersive scene from The City 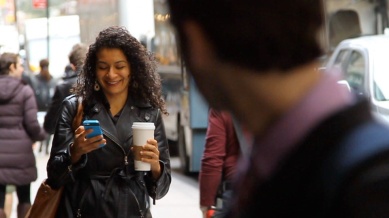 Film still from The City 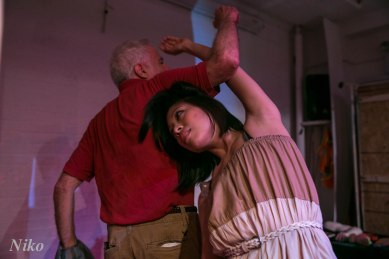 Audience participation at intermission of The City 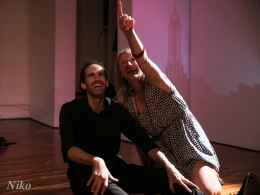